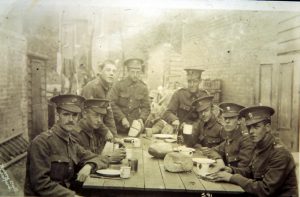 At the time of the Great War (1914-18) the villages of Abbots Langley, Bedmond, Leavesden, Langleybury and Hunton Bridge were farming communities about four miles to the north-west of Watford, in the county of Hertfordshire.

In the 1911 Census the Parish of Abbots Langley, which included Bedmond, Langleybury and Hunton Bridge, showed the population to be 3,900. Of those working, most worked on the land, at the paper-making factories in the Gade Valley, in service at the many large houses in the area, or servicing the Asylum and Schools at Leavesden. With railways connecting the area to the capital there was a growing number travelling to London to work in clerical occupations and banking.

In August 1914 the tranquil countryside was awoken at the sounds of men of many London battalions sent to mobilise in the local area. The 13th London (Kensington’s) and later the 8th London (Post Office Rifles) were billeted at Abbots Langley; the 15th London (Civil Service Rifles) mustered at Bedmond; the 14th London Scottish marched from London to Garston Manor before leaving for France; and other units came to the area around Kings Langley. By the Spring of 1915 these units had all left for France, and were badly mauled in the early battles of the War.

In the early days of the War men from the villages joined up with these London Units and many were to serve and die with the Kensingtons, Post Office Rifles and Civil Service Rifles, and many more with the Bedfordshire and Hertfordshire Regiments.